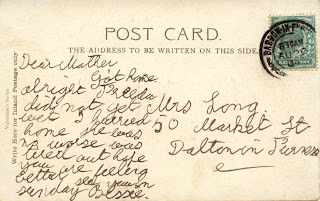 Janice Benson talks about postcards that belonged to her grandparents that she played with as a small girl.

She then reads some postcards from her Great Grandmother Bessie that Bessie sent to her family.
They are around 1904-1910 or so and Bessie was in service in one of the big houses on Abbey Road in Barrow-in-Furness. 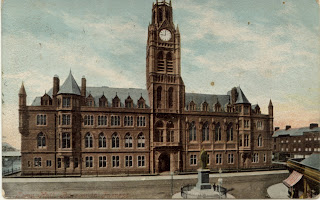 The thing that really stood out to us looking through the postcards is the way postcards were like the text messaging of their day.
Simple unadorned messages from one person to another to get a small piece of information over leaving bigger stuff to letters/email. There's nothing earth shattering in any of the postcards just simple family communication, very similar to texts my family send to each other - 'you fancy pizza tonight', 'leaving now, back at five' type things.
Posted by Clutter/Shaun Blezard at 00:13

Brought to you by:

Clutter/Shaun Blezard
Cumbria
Shaun Blezard is a musician and audio visual artist based in South Cumbria UK. He is currently working with electronic and improvised music. He has an interest in new technologies and how they can be used in music making, which has seen him using iPhone and Nintendo DS in his work alongside more traditional electronics and guitar and bass. He is interested in areas of music where genres meet and finding ways to incorporate this melding of influences back into his music. His working method involves the use of field recordings, both raw and processed, to convey a sense of place and narrative, with the immediate sonic environment at the core of his work.